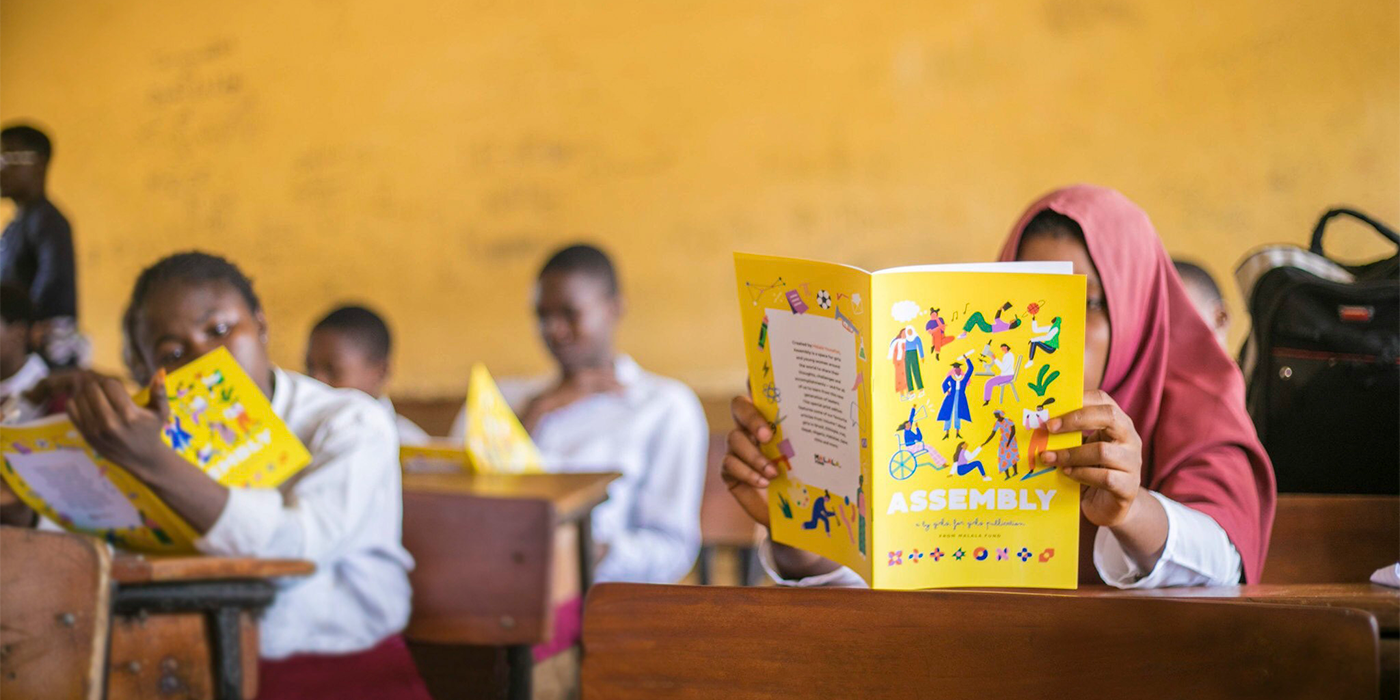 Courtesy of Joshua Attah for YouthhubAfrica

Tess Thomas is the editor of Assembly, a digital publication and newsletter from Malala Fund.

Malala Fund created Assembly, a digital publication and newsletter, to provide girls with a platform to share their stories — and to learn from their peers around the world. In July 2019, Malala Fund published a special print edition to commemorate Assembly’s first year and reach readers who don’t have regular internet access.

The 32-page mini-magazine features articles, essays, stories, photos and illustrations. Readers can learn about a Pakistani illustrator using her art to challenge stereotypes about Muslim women. They can follow a 16-year-old Nepali student through a photo spread of her rowing across a lake to get to school every day. And they can experience a week in the life of a 15-year-old in Lebanon through her diary entries. Most articles appear in English and in the subjects’ native languages, including Amharic, Arabic, Dari, Hausa, Hindi, Portuguese, Spanish and Urdu.

“When I saw the print edition for the first time, I felt proud. I immediately thought a girl somewhere around the world would read my story and it might inspire her to overcome challenges and encourage her to continue their education despite the obstacles,” shared Yazidi refugee and student Nibras Khudaida, whose personal essay about fleeing ISIS and fighting to continue her education appears in the print edition.

“Thanks to this publication, we can share our story and inspire more young women around the world,” explained Pakistani student Azka Athar. The print edition features Azka’s work with Team Auj, an all-female team of university students from Pakistan who build and drive race cars for international competitions.

South African illustrator Tyla Mason created custom art for the issue and helped bring the stories to life. “The articles had such interesting real-life personalities to draw from and I approached it with a youthful, colourful and bold manner to personify the Assembly readership,” said Tyla. “I wanted the characters to be depicted as positive and empowering so that the readers could feel an immediate connection to the subject matter.”

Assembly’s print edition shows what makes this publication truly unique. It’s a place where girls from Brazil, Ethiopia, Iraq, Nepal, Nigeria, Pakistan, Saint Kitts and beyond are able to write about their accomplishments, struggles and hopes for the future.

In July 2019, Malala Fund gave Assembly readers the opportunity to request copies of the print edition through a submission form. Girls and Malala Fund Champions in 22 countries distributed over 2,000 copies in their communities, including in Australia, Bolivia, India, Indonesia, Mexico and Tanzania. 18-year-old student Sukh from New Zealand handed out the print issue to her friends at school, while Peruvian teacher Estefanía Welsch Leveroni plans to give copies to her students in San Lorenzo Alto, a rural community in Cajamarca.

In Nigeria, Malala Fund Champions Habiba Mohammed, director of the Centre for Girls’ Education (CGE), and Rotimi Olawale, co-founder of YouthhubAfrica, used the print edition to initiate conversations about girls’ education and youth leadership with girls in their programmes.

“The print Assembly is very motivating, because the girls get to read stories from girls like them around the world,” Habiba said. “They are not able to access the print via the internet and so this is very important to us all.”

“With these stories, the girls were inspired to take actions and create an impact within the society as leaders irrespective of their age,” said Rotimi, who shared copies at the organisation’s Dora Club.‍

In Turkey, Malala Fund Champion Metin Çorabatır, founder and president of Research Centre on Asylum and Migration (IGAM), distributed copies at local secondary schools where teachers encouraged students to respond to their favourite articles through letters or drawings.

During a session held by IGAM at Bilkent Secondary School in Ankara, 120 students and teachers discussed the print edition and the importance of education for refugee students. Tenth grade student Utku Mert Yakar said of the experience, “When I finished reading, I did research about Malala Fund and I understood their vision and mission. From now on, I will tell my friends about Malala Fund and the importance of girls’ education. I may even write my own story to Assembly.”

To read the print edition of Assembly, visit: assembly.malala.org/stories/print-edition-assembly.