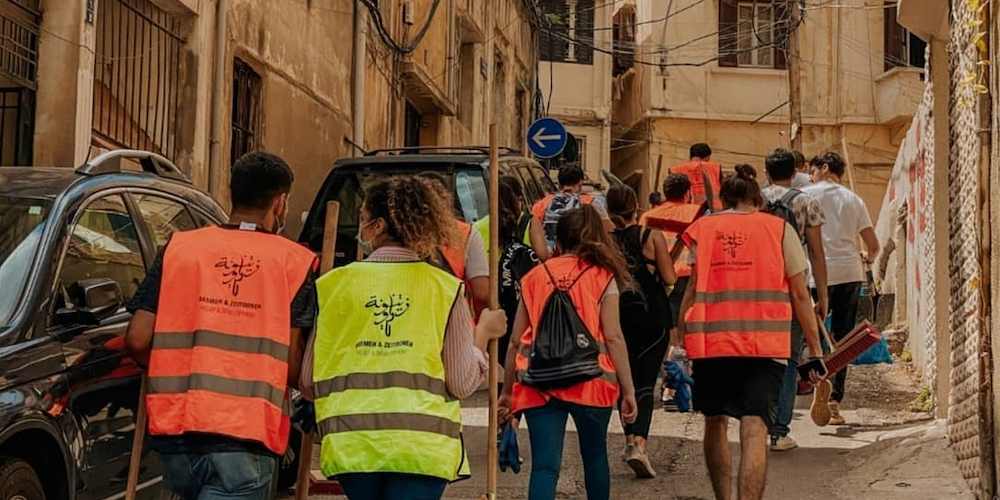 Marielle is the editorial associate at Malala Fund. She edits external-facing content and helps the communications team generate ideas for Assembly and Newsroom stories.

On August 4, 2020, a large stockpile of ammonium nitrate detonated in Beirut’s port, tearing through the Lebanese capital and killing over 200 people. The shock wave damaged buildings up to 20 kilometres from its epicentre, wounded over 6,500 people and forced some 300,000 more from their homes, including 100,000 children — a devastating blow for a country already in the throes of a financial crisis and the COVID-19 pandemic.

After the explosion, 163 public and private schools and 20 technical and vocational training establishments in and around Beirut reported partial or complete destruction, impacting more than 85,000 students. The damage is likely to strain a public school system already overwhelmed by Lebanon’s worsening currency crisis. In the 2019–2020 academic year alone, around 100,000 students switched from private to public school after their parents could no longer afford tuition. Estimates indicate that number could double in the year ahead.

Operational schools across Lebanon have suspended some in-person learning to curb a sharp surge in COVID-19 cases in August and September. But the mass shift to blended learning amid a financial crisis means some students won’t have the resources to keep up. “We are already seeing families calling us to say that they can’t pay for their kids’ schools,” says Malala Fund Education Champion Fadi Hallisso. “Even if they can pay tuition fees in this crisis, they find themselves unable to buy laptops or tablets required for online education.”

Fadi is the founder and CEO of Basmeh & Zeitooneh, an organisation that works with Syrian refugees in Lebanon and Turkey. In the aftermath of the blast, Fadi and his staff focused their efforts on emergency response in Beirut’s hardest-hit neighbourhoods. “We have had to put almost everything on hold,” says Fadi. “Our staff went down into the streets and volunteered in the cleaning effort. We provided some logistical support — tools, travel, plastic bags, water and sandwiches for the volunteers.” Basmeh & Zeitooneh then formed a task force responsible for implementing the organisation’s four-pronged response: emergency package distribution, shelter rehabilitation, psychosocial support and financial aid for victims of the blast. “There are multiple layers of crisis,” Fadi says. “People need support in different ways.”

Following the explosion, Malala Fund worked to support its Education Champions in Lebanon, allowing them to put 10% of ongoing grants towards emergency response expenses. For Fadi, the money was a means of supporting staff members who had sustained injuries or lost homes in the blast. “Life can’t continue at its normal pace for a while,” Fadi says of his organisation’s shifting priorities.

The same was true for Education Champion Nayla Fahed after the Beirut headquarters of Lebanese Alternative Learning (LAL), the NGO she heads, sustained significant damage in the explosion. The organisation has since repaired their offices, and Nayla is back to leading distance learning solutions for students. “[Before the blast] we were mainly targeting areas outside of Beirut — the North and the Beqaa Valley,” she shares. “But now we are targeting the affected areas around Beirut.”

The need for digital learning resources is more pressing than ever, but LAL is weary of a one-size-fits-all approach. “In some areas children have no devices and cannot access the internet,” explains Nayla. “Different areas have different needs and different means of reaching their students.” That’s why LAL is working in partnership with Malala Fund and Basmeh & Zeitooneh to provide teachers with remote capacity-building and internet-free resources, including projects students can complete “using their own environment — pen, paper, books and creativity.” Over the past few months, LAL has also seen the user base for Tabshoura, an internet- and electricity-free digital learning platform, grow from 8,000 to 25,000 students. Meeting the increased demand for digital education has been a challenge, Nayla says, but the moment is an opportunity to assess the efficacy of Tabshoura and improve it for future use. “This is giving us feedback that could help us upgrade our platform,” Nayla says. “It’s a whole new way of approaching what we were doing before.”

For Education Champion Hiba Hamzi and her organisation Naba’a, recovery efforts must address the crises’ disparate impact on adolescent girls and young women — especially with regards to hygiene. “Prices are very high and people have no work to provide for their basic needs,” says Hiba. “If families have limited budgets they will provide their children with food parcels but won’t provide for adolescent girls’ hygienic needs.” Additionally, as displaced families seek shelter with relatives, interrupted routines are likely to cost young women their menstrual health. “Girls are not practising their normal life,” Hiba explains. “They don’t have their own privacy.”

With her Malala Fund grant, Hiba lobbies decision-makers in Lebanon to raise the minimum legal age of marriage to 18 and trains refugee girls in leadership and advocacy techniques. After the blast, however, Naba’a repurposed 10% of its grant to distribute hygiene and disinfection kits to girls in and around Beirut. “It comes to letting girls and young women live in dignity and be protected from disease,” says Hiba. She also emphasises the importance of responding to the explosion’s psychological toll on girls and young women. “In these situations, what is most needed is psychosocial support — the opportunity for girls to talk about their fears, to talk about their concerns, to talk about their problems,” she shares.

Emergency response will continue through the year for all three Education Champions as the country grapples with multiple crises. For his part, Fadi hopes the global community’s renewed interest in Lebanon will prove genuine and long lasting. “The solidarity we’ve seen in the aftermath of the blast was very encouraging,” says Fadi. “But, as a Syrian, I’m afraid the sympathy and media attention will go away very soon and people will be left on their own to deal with the consequences.”