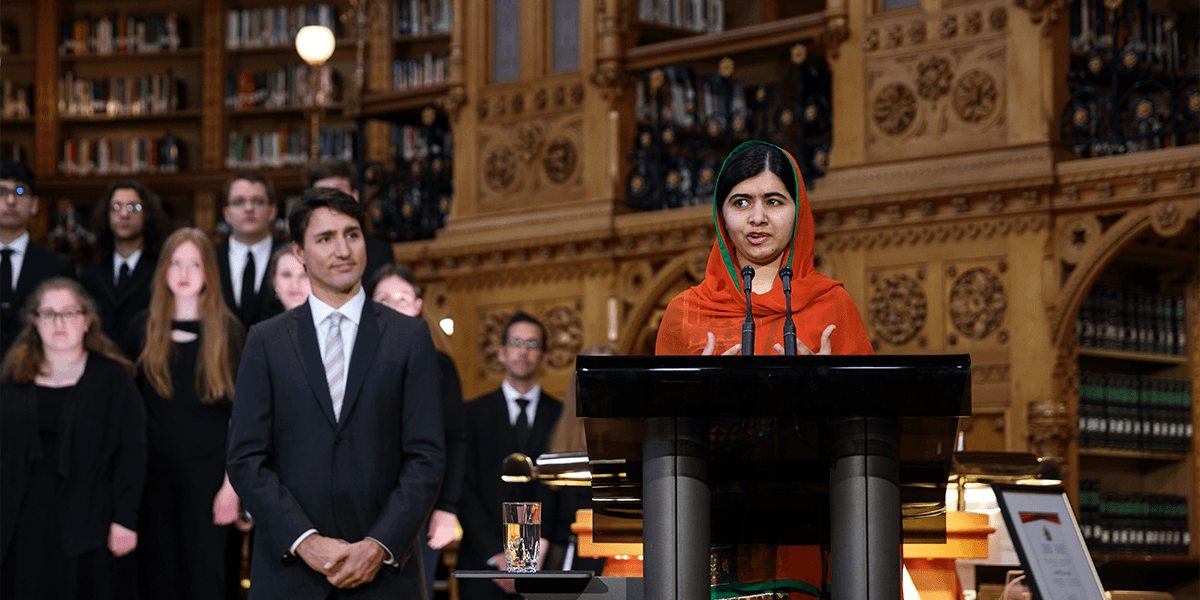 Malala Yousafzai is a Pakistani activist, student, UN messenger of peace and the youngest Nobel Laureate. As co-founder of Malala Fund, she is building a world where every girl can learn and lead without fear.

Bismillah hir rahman ir rahim. In the name of God, the most merciful, the most beneficent.

Mr. Prime Minister and Madame Gregoire Trudeau, Mr. Speaker, members of the House, members of the Senate, distinguished guests, my parents Ziauddin and Toor Pekai, people of Canada — thank you so much for the warm welcome to your country.

This is my first trip to Canada, but not my first attempt. On October 22, 2014, my father and I landed at the Toronto airport, excited for our first visit to your wonderful country.

We soon learned that a man had attacked Parliament Hill — killing a Canadian soldier, wounding others and threatening leaders and civil servants in the building where I stand today.
Canadian security professionals advised us to reschedule. With sorrow in our hearts, we headed back to England, promising to return to Canada one day.

I am a Muslim and I believe that when you pick up a gun in the name of Islam and kill innocent people, you are not a Muslim anymore.

He did not share my faith. Instead, he shared the hatred of the man who attacked the Quebec City mosque in January, killing six people while they were at prayer.

The same hatred as the man who killed civilians and a police officer in London three weeks ago.

The same hatred as the men who killed 132 school children at Pakistan’s Army Public School in Peshawar.

The same hatred as the man who shot me.

These men tried to divide us and destroy our democracies, our freedom of religion, our right to go to school.

But you refuse to be divided. Canadians — wherever they were born and however they worship — stand together. And nothing proves this more than your commitment to refugees.

Around the world, we have heard about Canada’s heroes.

We heard about the members of First United Church, here in Ottawa, who sponsored newlyweds Amina and Ebrahim Alahmad. A few months later the Alahmads had their first child — a little girl named Marya. The church decided to raise more money to bring Ebrahim’s brother and his family to Canada — so Marya could grow up with her cousins.

We heard about Jorge Salazar in Vancouver, who came to Canada as a child refugee, fleeing violence in Colombia. As a young adult, he’s working with today’s child immigrants and refugees, helping them adapt to their new country.

And I am very proud to announce that Farah Mohamed, a refugee who fled Uganda and came to Canada as a child, is Malala Fund’s new CEO. A Canadian will now lead the fight for girls’ education around the world.

Many people from my own country of Pakistan have found a promised land in Canada — from Maria Toorpakai Wazir to my relatives here today.

Like the refugees in Canada, I have seen fear and experienced times when I didn’t know if I was safe or not. I remember how my Mom would put a ladder at the back of our house so that if anything happened we could escape.

I felt fear when I went to school, thinking that someone would stop me and harm me. I would hide my books under my scarf.

The sound of bombs would wake me up at night. Every morning I would hear the news that more innocent people had been killed. I saw men with big guns in the street.

There is more peace in my home of Swat Valley, Pakistan today, but families like mine — from Palestine to Venezuela, Somalia to Myanmar, Iraq to Congo — are forced to flee their homes because of violence.

"Welcome to Canada" is more than a headline or a hashtag. It is the spirit of humanity that every single one of us would yearn for, if our family was in crisis. I pray that you continue to open your homes and your hearts to the world’s most defenceless children and families — and I hope your neighbours will follow your example.

I am humbled to accept honorary citizenship to your country. While I will always be a proud citizen and daughter of Pakistan, I am grateful to be an honorary member of your nation of heroes.

I was also so happy to meet your Prime Minister this morning. I am amazed by his embrace of refugees, his commitment to appointing Canada’s first gender-balanced cabinet and his dedication to keeping women and girls at the centre of your development strategy.

We have heard so much about Prime Minister Trudeau — but one thing has surprised me: people are always talking about how young he is.

While it may be true that he is young for a head of state, I would like to tell the children of Canada: you do not have to be as old as Prime Minister Trudeau to be a leader!

I used to think I had to wait to be an adult to lead. But I’ve learned that even a child’s voice can be heard around the world.

Young women of Canada, step forward and raise your voices. The next time I visit, I hope I see more of you filling these seats in Parliament.

Men of Canada, be proud feminists. And help women get equal opportunities as men.

And to the leaders of Canada in this room today: though you may have different politics and priorities, I know each of you is trying to respond to some of our world’s most pressing problems.

I have travelled the world and met people in many countries. I’ve seen firsthand many of the problems we are facing today — war, economic instability, climate change and health crises. And I can tell you that the answer is girls.

Secondary education for girls can transform communities, countries and our world. Here’s what the statistics say:

- • If all girls went to school for 12 years, low and middle income countries could add 92 billion dollars per year to their economies.

- • Educated girls are less likely to marry young or contract HIV — and more likely to have healthy, educated children.

- • The Brookings Institution calls secondary schooling for girls the most cost-effective and best investment against climate change.

- • When a country gives all its children secondary education, they cut their risk of war in half.

Education is vital for security around the world, because extremism grows alongside inequality — in places where people feel they have no opportunity, no voice, no hope.

When women are educated, there are more jobs for everyone. When mothers can keep their children alive and send them to school, there is hope.

But around the world, 130 million girls are out of school today. They may not have read the studies and they may not know the statistics — but they understand that education is their only path to a brighter future. And they are fighting to go to school.

Last summer, on a trip to Kenya, I was introduced to the bravest girl I’ve ever met.

At age 13, Rahma’s family fled Somalia and came to Dadaab — the world’s largest refugee camp. She had never been inside a classroom — but she worked hard to catch up and, in a few years, graduated primary school.

At 18, Rahma was in secondary school, when her parents decided to move back to Somalia. They promised she could continue her education.

But when her family returned to Somalia, there were no schools for her to attend. Her father said her education was finished and that she would soon marry a man in his 50s — a man she did not know.

Rahma remembered a friend from the refugee camp, who had won a scholarship to a university in Canada. She borrowed a neighbour’s internet connection and contacted him through Facebook. Over the internet, the university student in Canada sent her 70 dollars.

At night, Rahma snuck out of her house, bought a bus ticket and set out on an eight-day trip back to the refugee camp — the only place she knew she could go to school.

Through the Sustainable Development Goals, our nations promised every girl she would go to school for 12 years. We promised that donor countries and developing countries would work together to make this dream a reality for the poorest girls in the world.

I know that politicians cannot keep every promise they make — but this is one you must honour. World leaders can no longer expect girls like Rahma to fight this battle alone.

We can gain peace, grow economies, improve our public health and the air that we breathe. Or we can lose another generation of girls.

I stand with girls, as someone who knows what it’s like to flee your home and wonder if you’ll ever go back to school.

I stand with girls, as someone who knows how it feels to have your right to education taken away and your dreams threatened.

I know where I stand. If you stand with me, I ask you to seize every opportunity for girls’ education over the next year.

Dear Canada, I am asking you to lead once again:

First, make girls’ education a central theme of your G7 Presidency next year.

Second, use your influence to help fill the global education funding gap. You raised billions of dollars and saved lives when you hosted the Global Fund replenishment in Montréal last year. Show the same leadership for education.

Host the upcoming replenishment of the Global Partnership for Education, bring world leaders together and raise new funding for girls to go to school. If Canada leads, I know the world will follow.

Finally, prioritise 12 years of school for refugees. Today only a quarter of refugee children get secondary education. We should not ask children who flee their homes to also give up their dreams. And we must recognise that young refugees are future leaders on whom we will all depend for peace.

The world needs leadership based on serving humanity — not based on how many weapons you have. Canada can take that lead.

Our world has many problems, but we don’t need to look far for the solution — we already have one.

She is living in a refugee camp in Jordan. She is walking five kilometres to school in Guatemala.

She is sewing footballs to pay enrolment fees in India. She is every one of the girls out of school around the world today.

We know what to do — but we must look inside ourselves for the will to keep our promises.