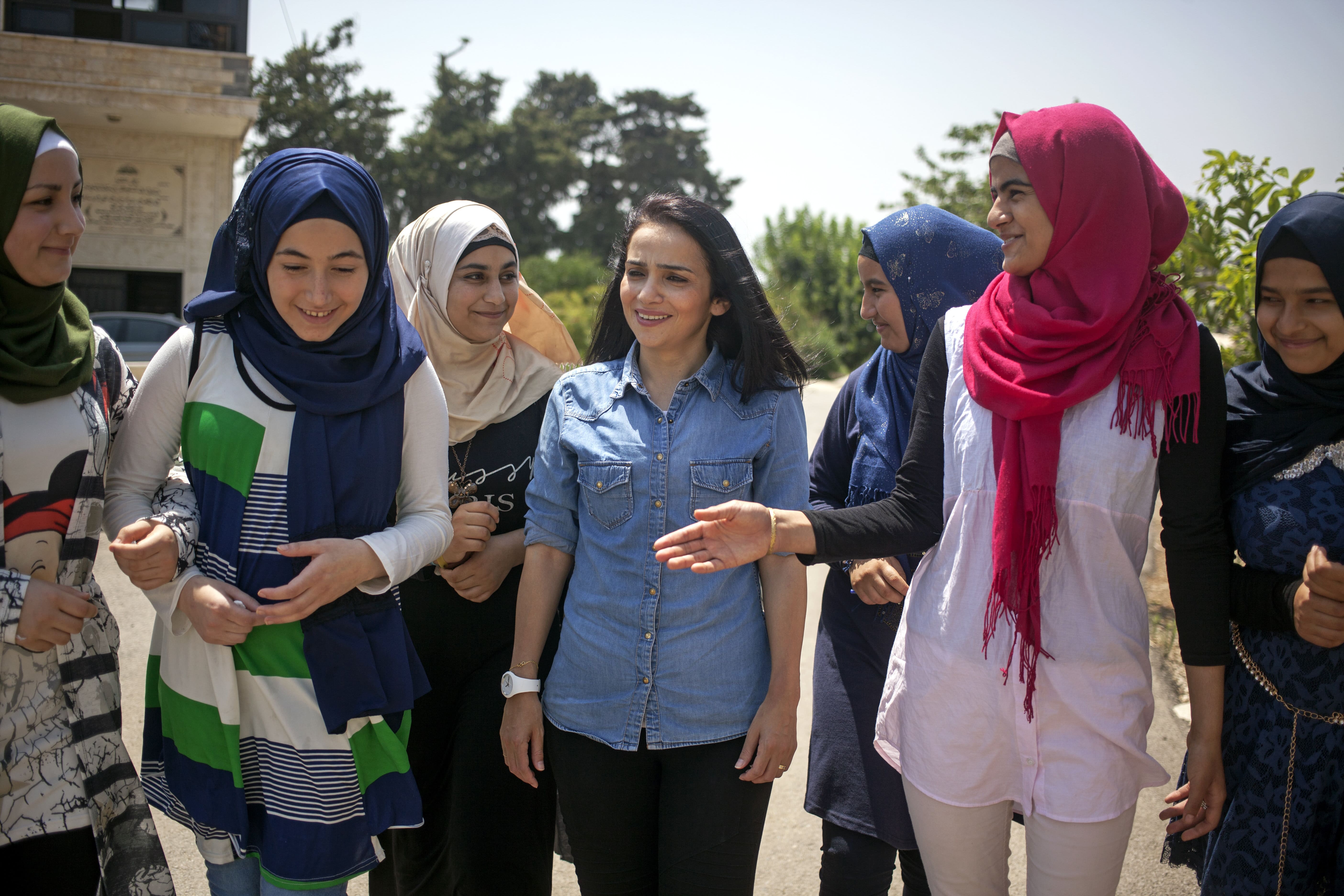 Miriam is the Middle East Regional Representative at Malala Fund. She works with local grantees in Syrian region to expand girls’ education initiatives.

In Lebanon, the Syrian refugee crisis has led to an alarming rise in rates of child marriage. Syrian girls are now four times more likely to be married early than they were before the crisis. In times of strife, families often see child marriage as a way out of poverty or a means to protect their daughters from violence. Social norms and gender inequality also influence their decisions.

To encourage local leaders to understand the consequences of this practice, five Syrian and Lebanese teens — including Alaa Al Husni, Marwa Rayya and Anwar Outour — joined forces to host a virtual conference on ending child marriage. With support from Malala Fund Education Champion Hiba Hamzi and her organisation, Naba’a, the girls brought together community members, local officials, parents, girls and nonprofits to discuss the issue.

“These girls are examples of how young women and girls are fully capable of advocating for their rights,” says Hiba. “It’s crucial to have safe spaces for adolescent girls to build their confidence and advocacy skills, and empower them to have informed dialogues with families, communities and local leaders.” As the Education Programme Coordinator at Naba’a, Hiba holds workshops to inform girls about the risks of early marriage and the importance of education. She helps girls like Alaa, Marwa and Anwar develop their own local advocacy campaigns that challenge barriers to education in their communities. Hiba also lobbies to raise the country’s minimum legal age of marriage to 18.

Due to conflict in Syria, Alaa and Marwa relocated to Lebanon where they faced societal pressures to marry. Alaa was engaged to be married and decided to advocate for herself and break the engagement after attending Naba’a education programmes. A few of the teens leading the conference shared how Naba'a helped them reenrol in school after they dropped out and trained them as volunteers for the organisation.

At the conference, Alaa, Marwa, Anwar and their co-organisers spoke about their experiences and explained the actions they want to see leaders take — including establishing advocacy networks to raise the minimum age for marriage to 18 and ensuring every child can access free, quality education. The girls led participants in discussions about amending law 150/2011 — which guarantees the right to education for all school-age Lebanese citizens — to specify that children under the age of 18 can’t get married. This amendment would make it more difficult for underage girls to be forced into marriage and help them stay in school.

“Creating spaces for girls where they see their voice matters and where they can develop their confidence to communicate their needs is critical for creating gender-equal societies,” says Gayathri Butler, Malala Fund’s Director of Advocates Programmes. “When given the opportunity, we see girls and young women quickly lead the charge to advocate for change, both for themselves and on behalf of others to drive positive change around them.”

We asked three of the young women who organised the conference to share their thoughts about their experience, what they learned and how Naba’a helped them become better leaders. Here’s what they had to say:

“What I liked the most through my participation in the Malala Fund project is that I open my eyes to life, have a better view for my future and get rid of all my bad thoughts that were centered on the white dress and the better life of early marriage. My favorite part is that I am now fighting for girls’ education and trying to raise awareness about the importance of education, risks of early marriage and child protection among my peers. Through Champions working for the Girls’ Education Project, I learned about the importance of education and I succeeded in conveying this information to other girls and convincing them to continue their studies.”

‍“Before I joined Naba’a through the Malala Fund project, I was a very shy girl, who could not easily express her opinion. It was difficult to know what’s going on in her mind. What I liked most about joining this project was that it gave a great space for female voices to be heard on different issues through the awareness sessions they held about the importance of education, risks of early marriage and child protection. It gave me the chance to acquire new life skills which taught me how to be a distinguished, independent and successful girl—and it solved most problems that I faced. It gave me the chance to get involved in society and to help my friends find their way through education. I also tried to convince their families that marriage is the second step after education and girls are the future mothers of any society.”

‍“My favourite part of this project is that it made me complete the thing that I believe in. I was always wondering why girls are always deprived of their rights and why they are always forced into early marriage! Why do girls not continue their education to prove to the world that they can do it? When I joined Naba’a, they gave girls awareness sessions about the importance of education, risks of early marriage and child protection. In turn, we gave these sessions to our peers and families which had a good impact on them and we could change their minds and encourage them to allow their girls to continue their education.”‍

Educating girls is one of the most powerful ways to reduce the risk of child marriage. Improving girls’ secondary school enrolment rates and addressing the barriers to education empowers girls to make informed decisions about their future and have greater economic opportunities. Naba’a will continue to work with Alaa, Anwar, Marwa and their peers, helping them lead the fight to see every girl in Lebanon in school.